A friend of mine posted this picture on social media with the caption, "Hooray! A Keurig machine in our hotel room! Anyone else see the problem here?" 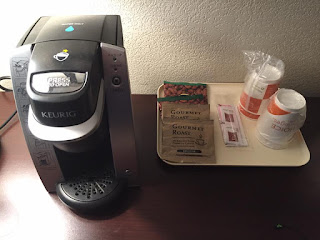 One person responded: Aw, no pods! That's just a tease 😉

Always the clever quality management expert I responded:
They need me to help them with their quality management system (QMS). No pods is just the symptom. The root cause problem is that the bright sparks who decided to change the coffee machines did not ensure that the Work Instructions (WI) for room service were changed and then followed up with appropriate training to ensure Keurig pods were provided instead of Gourmet Roast filters.

Wikipedia defines 'gemba' as
a Japanese term meaning "the real place." Japanese detectives call the crime scene gemba, and Japanese TV reporters may refer to themselves as reporting from gemba. In business, gemba refers to the place where value is created; in manufacturing the gemba is the factory floor.


Being a practical schoolteacher, my friend went to gemba with her problem, to the hotel front desk:
Long story somewhat short... when I inquired at the front desk in the morning, I was told that the owner said that they were having issues with the "pods" so he was gradually replacing the machines with the other "normal" type. I pointed out the obvious and the front desk employee completely agreed that it was "silly" to have these in the room. I asked if anyone pointed out that fact to the owner, her response... "No. May I tell him you said it was ridiculous?" My response... "of course. Tell him it makes him look "silly", for such a non-thought out decision."

My assumption, without going to gemba, was that the hotel was replacing the old, 'normal' coffee machines with Keurig. Feasible, reasonable, even probably correct in a generalised scenario but, nevertheless, WRONG. The direction of my deductive root cause analysis was out by 180 degrees. Embarrassing, to say the least.

The moral of the story: ALWAYS GO TO GEMBA when doing a root cause analysis, especially when the deductions seem obvious.
Posted by Terry at 14:02 No comments:

Climate change has to be commercialised if it is to succeed

I have just finished reading, "How to Plant a Tree in the Desert", a New Yorker article by Russell Shorto. It is about a Dutch engineer who has developed a cheap and easy way to restore vegetation to barren landscapes and, very importantly, a for-profit business to advance the cause.

José Luis Rubio, the vice chair of the European Soil Bureau Network, called Ruys’s invention “remarkable” in its results and told Shorto that it represents “an innovative method” to restoring vegetation to barren landscapes.


So what did Ruys invent? One way to restore degraded soil is to plant trees—lots of them. The catch is that seeds and saplings won’t grow in such soil, but if a young tree becomes large enough that its roots can reach groundwater it stands an excellent chance of thriving. Previous efforts often followed two paths: cumbersome and impractical irrigation techniques, or tossing a few million seeds out of an airplane and hoping for the best. Ruys’s innovation was to develop a doughnut-shaped waxed-paper cocoon, the base of which is buried underground. It contains the sapling, enough water to sustain the tree while it establishes a root system, and a small lozenge of beneficial fungi. The cocoon is cheap, easy to plant, scalable—a community can plant hundreds of acres of them in a short time—and biodegradable.

… In its three years of existence, Ruys’s company has planted a quarter of a million trees in twenty countries… Ruys and his partner insisted from the start that Land Life should be a for-profit company. As of this year, it is breaking even on revenue of approximately 2.5 million euros, with clients ranging from N.G.O.s to private companies to an Israeli businessman who has paid Land Life to plant trees on both sides of the Israel-Palestine border.


The article makes fascinating reading and I wish I had the money to invest in the company.

Read the full article in the New Yorker: "How to Plant a Tree in the Desert"
Posted by Terry at 18:35 No comments:

Is saying, "as a goodwill gesture…" really an apology?

By now the whole world knows about Doctor David Dao who needed hospital treatment after being dragged off a United Airlines flight.


And many of us, meanwhile, will have heard that United Airlines again allowed too many passengers to board a plane, this time on a flight from Houston to Boston, resulting in a mother having to hold her 27 month old son on her lap in violation of FAA safety guidelines. The mother did not protest too strongly because she "did not want anyone to get hurt," the experience of Dr. Dao still fresh in her memory. (You can read about that here.)

This is the statement from United Airlines on this most recent event as reported by ABC News:

"On a recent flight from Houston to Boston, we inaccurately scanned the boarding pass of Ms. Yamauchi's son," the statement read. "As a result, her son's seat appeared to be not checked in, and we released his seat to another customer, and Ms. Yamauchi held her son for the flight."
It continued, "We deeply apologize to Ms. Yamauchi and her son for this experience. We are refunding their tickets and providing compensation as a goodwill gesture. We are also working with our employees to prevent this from happening again."


From my experience in quality management, albeit in healthcare and design, development and production, allow me three general observations with lessons beyond the airline industry.

1. "… working with our employees to prevent this from happening again."

Put very simply, United Airlines top management have just thrown their employees under the bus but, not to worry, management will work with their employees to fix the problem. Read: we will give the employees concerned a dressing down and explain to them how they screwed up - in words they can really understand!

One of my quality heroes is Dr. W. Edwards Deming who was passionate about not “blaming” workers for poor quality when so much of the problem was because "the system" allowed it to happen. It is top management who are responsible for the system. Maybe one or more workers did screw up, but the fact remains that the system allowed too many passengers to board the plane, and this mere weeks after their experience with Dr. Dao. "Working with their employees" might help somewhat, but it is even less of a guarantee once there is employee turnover and a new crop of employees takes over. The problem is in the system more than with the employees. That is a management responsibility.

Hello?  Is anybody listening? Does anybody care? A cabin crew member of my acquaintance decades ago told me that the most important responsibility of cabin crew is the safety of passengers. Has that changed? The element of safety is completely lacking in the reported statement by United Airlines. The fact that no serious injury occurred is no excuse for placing the child at risk - something that the system did not prevent from happening.

3. "… providing compensation as a goodwill gesture."

Let's not play with words. Compensation is something that is due, either for work performed or as a recompense for loss, injury, or suffering. It is an insult to say you are paying compensation "as a goodwill gesture." It is also an implicit denial of responsibility for the loss, injury or suffering for which compensation is being paid. The depth of the apology ("We deeply apologize…") is revealed as actually being very shallow indeed.

The four words, "as a goodwill gesture," are also a huge PR gaffe. I have no reason to suspect that top management at United Airlines really have the importance of their customers as people at heart, that customer satisfaction has any value beyond dollars and cents. In fact, I doubt that they would even understand the intent of this paragraph.


In my opinion, if United Airlines really wants to improve as a company, their top management needs to have an attitude transplant to understand what it means to be responsible for the system and the inter-related processes required to ensure the quality service it is supposed to produce.
Posted by Terry at 13:49 No comments: