In his excellent post, Implementing ISO 9001:2015 – The Process Approach, blogger Paul Simpson focuses on the ‘deep dive’ required to really understand our processes in order to capture them accurately.

"We’ve probably all seen the extremes – on the one hand perhaps a wall full of mind sapping detail, on the other a series of banal boxes neither helping staff and leaders.  So this quote, ‘Everything should be made simple as possible, but no simpler‘ attributed to Albert Einstein, is a useful stimulus in thinking about making process analysis useful, and to help ISO 9001:2015 registration.

"The point of analysing our processes is to ensure we understand how each process works and what we need to do as individuals, leaders and organisations to ensure the process operates efficiently and delivers effectively."

"We have to break each process down into as few simple steps as possible based on our experience of how they work in real life. And we must ensure that we understand their relationships and contribution to the other processes in the overall system in generating outputs for the customer."

Read the full post here: Implementing ISO 9001:2015 – The Process Approach
Posted by Terry at 14:39 No comments: Links to this post

Posted by Terry at 11:29 No comments: Links to this post

According to an article in the LA Times, when Pope Francis was still an archbishop in Argentina some years ago the archdiocese had a limo that that he could have driven around in. Parishioners of Our Lady of Caacupe tell how, instead of taking the limo to get to the church, he would take the bus and then walk half a mile to the church operating out of a converted warehouse. People knew him and would walk with him. "Once I met him at the bus stop and offered to carry his briefcase the rest of the way, but he wouldn't hear of it," said Monica Morales, a church volunteer and mother of six.

Fast forward to December, 2015. The Pope, who sometimes eats in the staff canteen and who already has a reputation for occasionally picking up the phone and calling ordinary people, repeats the surprise, calling a family whose little boy had written him out of concern for his ailing aunt. He is reported to have had a 15 minute chat with the boy's mother, putting her at ease and enquiring about the family. 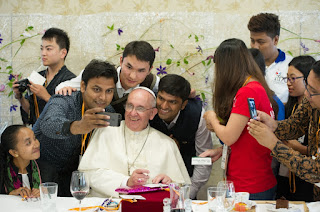 The Pope has probably never heard of 'gemba' or 'genchi genbutsu', but he sure knows how to practice it. Cynics might argue that this is just a PR stunt. I cannot prove that it is not. However, in none of these events has the publicity come from the papal marketing department; it is the people that he touched who went public, directly or indirectly. Vatican comment has always been very muted about these incidents. In my opinion the Pope sees this as a two-way street the value of which he learnt long ago in the barrios of Argentina. Sure, he is being a pastor and setting example, and so on. But he is also observing, engaging and learning. He learnt to deal compassionately with pastoral and moral problems not so much out of text books but by being close to the people who were suffering. He encountered the problems by engaging with the people who have the problems, listening to them, learning from them, empathizing with them.

Without going to gemba a manager is operating in an ivory tower. Who would have thought that the Pope has something to teach managers and CEO's?  Genchi Genbutsu. "Go, Look, See". Then you will discover opportunities for kaizen improvements.

(With material from Religion News Service and Los Angeles Times.)

Posted by Terry at 21:50 No comments: Links to this post